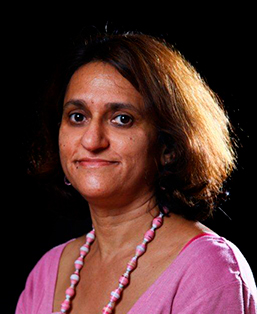 Razia Saleh is the Director of Archive and Research at the Nelson Mandela Foundation where she oversees the creation of an integrated and dynamic information resource on the life and times of Nelson Mandela, and the research and analysis required to support this.

Razia is also a Board member of the Ahmed Kathrada Foundation, established by the struggle stalwart. Kathrada was sentenced to life imprisonment during the Rivonia trial together with Nelson Mandela and others.

From 2001 to 2006, she was the Archives Project Coordinator for the African National Congress (ANC) Archives. Her main responsibility was to oversee the arrangement and description of ANC archives that consisted mainly of the documentation generated during the period that the ANC was in exile, 1960- 1990.

From 1988 to 2000 she helped set up and worked for the NGO South African History Archive (SAHA), which was created to safeguard the records of the United Democratic Front (UDF) and its affiliates. The UDF was the leading anti-apartheid organisation operating inside South Africa in the 1980s. Razia was an anti-apartheid and community activist, working full-time for the UDF and before that the Transvaal Indian Congress (TIC) after completing her studies. Mahatma Gandhi established the TIC in 1904 when he was living in South Africa.

«“Sport has the power to change the world”: The Nelson Mandela Archive»

In preparing for this paper, I looked at various Mandela quotes, and came across over a dozen on sport. However, the most frequently quoted and widely used quote is the one above. Sport undoubtedly had a special place in Mandela’s heart. The discipline, the routine exercising, the physical and mental challenge appealed to his nature. In a letter to his grandchild Dumani he encourages participating in sports: “taking part in sports like running, swimming and tennis will keep you healthy, strong and bright.”

This presentation will begin with a brief overview of the Nelson Mandela Foundation and the Centre of Memory and then focus on the work of archives in dealing with Mandela’s legacy in contemporary South Africa. Interwoven in all of this will be role and place of sport in Mandela’s life.

Mandela was 75 years old when in May 1994 he became President of South Africa. Given his age he was reluctant to take up this position but when persuaded, agreed on condition that he will only serve one term. Therefore in June 1999 at the end of his term he did not stand for re-election. Soon thereafter, it was realised that although he was no longer President of South Africa he was still quite active undertaking a whole range of activities, and needed a support. Thus the Nelson Mandela Foundation was established as his post-presidential office, and for the next 5 years its role and function supported Mandela’s various interests and charitable endeavours.

In 2004 Mandela, just before his 86th birthday, announced that he was “retiring from retirement” and wished to spend time for himself, and with his family and friends. The Foundation then underwent a period in which it changed focus from being solely Mandela’s post-presidential office to propagating his legacy through memory, dialogue and legacy work, and to continue supporting Mandela’s considerably scaled down appointments.

Mandela’s life spanned nine and a half decades. He was born in 1918 when South Africa was under British colonial rule. Political and economic power was exercised by the settler Boer and British population, and African labour was exploited in the mines, farms and factories. The African National Congress (ANC) was formed in 1912 to fight against this exclusion and discrimination, and Mandela joined it in 1944, and 4 years later apartheid was introduced when the National Party came into power.

He was arrested in August 1962, and spent the next twenty-seven and a half years in apartheid jails. In prison Mandela began initiating talks with the Apartheid government in the mid-1980s, and it was partially due to this (and various other factors) that by 1990 the ANC and other organisations were unbanned and Mandela was freed on 11 February.

On 5 December 2013 Nelson Mandela passed away at his home in Johannesburg, situated not far from the Nelson Mandela Centre of Memory. Three weeks prior to his death, the NMF had officially opened a permanent exhibition on the Life and Times of Nelson Mandela which includes his post-presidential office as it was used, his Nobel Peace Prize medallion, and various manuscripts, artefacts, sound and video recordings.