Director of the Anoia County Archive 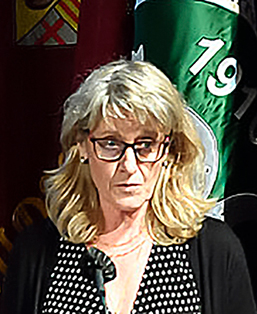 Marta Vives Sabaté is the director of the Anoia County Archive, which is part of the Network of County Archives of the Catalan Department of Culture. She was born in Igualada, in 1960, and holds an honours degree in Geography and History (University of Barcelona), specialising in palaeography and diplomacy. She began her professional career working for the Igualada Municipal Archive (1982-1986) and in 1986 she became the director of the Igualada County Historical Archive (later, the Anoia County Archive), where she was both the municipal archivist and the county archivist. She is a member of the Publications Council of the Centre d’Estudis Comarcals d’Igualada and a founding member of the Editorial Board of Revista d’Igualada. With regard to sport archives, she has promoted the project “Fem esport, fem arxiu” [Sports and Archives] at the Anoia County Archive. From the moment the project was first proposed by the Department of Culture, she organised several activities – the exhibition “Quan l’esport era un divertiment. L’esport a Igualada” [When sport was fun. Sport in Igualada] and various virtual exhibitions –, the aim of which was for Igualada to be named European City of Sport. As far as publications are concerned, she has written several articles on subjects related to the documentation of the Anoia County Archive. She has published, among others: Copi: Trenta anys de fotografia a Igualada (1930-1960); L’Arxiu de Protocols del Districte d’Igualada and, together with Antoni Dalmau and M. Teresa Miret, Els carrers i places d’Igualada; Nomenclàtor i història. She has coordinated and directed an exhibition on local themes every year – important locals, cinema, photography, streets, etc. – in collaboration with other institutions and the City Council.

The experience explains a project that sought to disseminate archive collections related to women in sport as part of the International Week of Archives of 2021 through a virtual exhibition in which different archives participated. Emphasis is placed on the activities developed by the Anoia County Archive in recent years, with various collaborators, such as the participation in the FineArt festival in Igualada, where large-scale photographs of women and sport were exhibited in the streets, or the recovery of an unpublished film from 1930.

One of the main activities of the International Archives Week 2021 was to highlight the role of women in different areas, particularly their connection to the world of sport over time, sometimes invisible. The monograph “Arxius amb noms de dones” seeks to highlight both the archives and documents produced by women, as well as those related to women given their prominent and evident role.

The virtual exhibition of the International Archives Week 2021 was an opportunity to provide access to the visual documents, especially photographs, that can be found in the collections of the National Archive of Catalonia, as well as the county and municipal archives that decided to participate. The research was carried out by searching all the archives, especially those produced by women or those in which women play a prominent role.

The monograph was structured in eight areas that sought to cover the role of women in our history, from the world of housework to more socially marginalised areas; a whole range of possibilities about their presence in labour, sport, education, culture and scientific research, etc. One of the proposals was an interactive map through which one can access the archives that have collections related to women. Surely there are more archives and collections to discover, but this is just a first snapshot. Access the map here.

In the context of women and sports, several proposals were published, among which we would like to highlight, apart from the information contained in the archive collections map, those of the Anoia County Archive (which we will see further on), the Pallars Jussà County Archive (Dones esportistes a l’Arxiu Comarcal del Pallars Jussà [Sportswomen in the Pallars Jussà County Archive]) and the Urgell County Archive (exhibition “Defensa en zona (1943-1944), 75 anys de basquet femení targarí” [Zone Defense (1943-1944), 75 years of women’s basketball in Tàrrega] and a summary on YouTube). As part of this exhibition, a video was produced for the Catalan TV channel TV3 and a small tribute was paid to three of the women who played in the 1943-1944 season in the Catalan Women’s Championship. This documentary won the XIII Mila Journalism Award for Gender Equality in Lleida in the audiovisual category and was broadcast, among other TV channels, on TV3. Finally, the virtual exhibition brought together photographs from different municipal, county and national archives.

Anoia County Archive: experiences in the dissemination of archive collections of women in sport

As part of the project “Fem esport, fem arxiu” of the Anoia County Archive, women’s sport is included as a reference for the history of human rights. The exhibitions that took place during the International Week of Archives in 2021 were dedicated to women and archives. The Anoia County Archive held two virtual exhibitions dealing with the inclusion of women in sport and their subsequent incorporation into sports considered to be masculine: “La dona a l’esport. De fèmines a esportistes” [Women in sport. From women to sportswomen] and “El bàsquet femeni a Igualada” [Women’s basketball in Igualada].

These virtual exhibitions are part of a larger project started in 2016 in which different topics around sport in Igualada were introduced in a web page. The first pages were dedicated to artistic or high-quality photographs taken by renowned photographers, most of which had been submitted to photography contests. Other pages were devoted to specific subjects: athletics, aviation, cycling, popular races, sports facilities, etc.

While the documentary research for the exhibitions was being carried out, apart from the images, newspapers and magazines from the beginning of the 20th century were also consulted and it became clear that the subject of women in sport had caused certain controversies in some circles. By reading newspapers and magazines of opposing tendencies, it is possible to reconstruct the path that women took to enter the world of sport. At the beginning of the 20th century, thanks to an educational renovation, women acquired more cultural knowledge and, just as men did, they practised sports such as cycling, tennis, fencing, skiing, basketball, hiking or swimming, as those were sports with less physical contact. With this, femininity was redefined, although the argument for practising sport was that it was good for their health and their physical preparation for motherhood.

The Women’s Section of the Athenaeum of Igualada for Working Classes had a significant amount of members who were supported by night schools, where, in addition to general education, women were offered the chance to practise physical culture and hiking. Nevertheless, the language used still had sexist connotations. Like other organisations in the city, Palestra, which was founded in Igualada in 1932, created women’s section and girl’s section guides. In those years, the female section of the Garcia Fossas High School also created a basketball and a tennis team.

That being said, it is very clear that the Francoist period erased all the improvements in terms of gender issues that had been achieved during the Second Republic. Therefore, women were once again relegated to housework. In the 1960s, some of the women in the Female Section (SF) rebelled against the regime’s sexism and fought for their rights. However, a significant part of the SF shared the same values and thoughts as the Spanish Falange. In Igualada, the Dance School opened in 1954, and allowed many girls to play sports, such as gymnastics, basketball and dance for many years. From the 1970s onwards, women were fully incorporated into the world of sport.

After the study and the virtual exhibition, we thought it would be a good idea to take advantage of two events that took place in Igualada. On the one hand, the FineArt photography festival, in which photographs from the Archive have been exhibited in large format (2 x 3 metres) for the last five years in certain streets and façades of the old town. This festival has an international projection and a very large number of visitors (more than 40,000 people), and the fact that these photographs are displayed on the street makes them much more visible. On the other hand, Igualada became European City of Sport 2019, and that year we were able to make the FineArt coincide with the designation as European City of Sport, hence images were posted in all the sports facilities of the city and throughout the year. Therefore, even though the title of the exhibition was “L’esport a Igualada” [Sport in Igualada], it focused on women and sport and, specifically, on women’s basketball.

It is also worth mentioning the recovery and dissemination of a video of a group of friends who went skiing in the Vall de Núria in 1930, in which men and women can be seen skiing together.